The most effective method for learning a language alone is...

...with all the posts on tips for learning languages, I thought I would write one on the method I always find to be by far the most effective at the intermediate level when one is studying alone (no teachers, no fluent speakers to chat with). This method is very simple: dictation, using paper and pen. Not typing.

Here's how it works.

Step 1: find something long in the target language you really enjoy. Hopefully a book by an author you like with corresponding text. News articles work as well though their scope tends to be rather limited (no colloquialisms, little first and second person, etc.). If you can't find something with matching text then in a pinch just going with audio will work, though you will end up with a lot of question marks on your paper as you come across bits and pieces that you just can't make out on your own no matter what. If this happens then you'll just have to skip to the next few seconds. But I'm getting ahead of myself. Because:

Step 2: get an mp3 player with an effective section repeat function (the ability to repeat just a few seconds of text over and over again), or download Audacity if using a computer. Audacity is best since instead of having to time the section to repeat you can look at the audio stream and check for yourself where the audio file has speech and where it has silence. It will look like this: 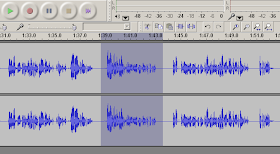 The highlighted part is the one you will hit play on to listen to whenever you want, and by holding shift when you push the play button you will be able to hear it played over and over again until you tell it otherwise.

Step 3: Write down what you hear to the best of your ability. Once you are done, check the text. Continue until you have filled up notebook after notebook.

So why is this method so effective?

- Having to write down what you are hearing is about the closest thing you can get while alone to the mental stimulation a real conversation gives you, the give and take where you have to understand what the person is saying and then respond. Here it is a little bit skewed: while you don't have to respond with anything of your own, you also have to understand perfectly what you are hearing, instead of just following along with context or clues, or simply pretending to understand until you can change the subject (I know you all have done this from time to time).

- Writing down what you hear is a great way to reinforce what you know and pay attention to words and grammatical points that you have been ignoring. Let's say you're learning German and for some reason you've been slacking off on the difference between konnen and können (edit: konnten and könnten), or your eyes glaze over when you hear the definite article in all its forms (der/die/das/den/dem/etc.). When writing something out though this is impossible to ignore. Moreover, now that you are listening to something you have to write out, the grammar now becomes an aid to hearing. Native English speakers do not always hear a clear difference between are and our or fifteen and fifty or anything else that sounds similar (or sometimes the same), they usually judge by context. In the same way, when doing dictation now the grammar you know has become a helpful tool to help you write down what you've heard. Now when you hear sie quoll you know thanks to grammar that you're talking about the pronoun her (or a female noun) and not sie as in they or Sie as in you. Of course, if you just hear sie quollen then you're screwed without context as it could also be Sie quollen. In Korean, knowing that the particle 이 comes after consonants instead of 가 (which comes after vowels) will give you a clue that what sounds like 인터네시 업다 (inteoneshi eopda) is actually 인터넷이 없다 - "there is no internet", because 이 after ㅅ is pronounced 시. So general context will still be important, but grammar will help out in a pinch.

- Writing down with a pen instead of typing will slow you down, and you want that. Remember, you're using this to study and your goal is to learn, not to dictate a full book as quickly as possible. If you're still going fast and want to really slow down, use your other hand to write.

- It will also help you with punctuation. Punctuation between languages tends to be fairly similar, but there are slight differences,<--(German comma usage) that you will want to be familiar with. Where to place commas is one particularly important point.

Back in 2007 I used this method to write out all 104 lessons of the Turkish version of Deutsch - Warum Nicht?, each of which was a 15-minute podcast with a few minutes of German but much more Turkish as the speaker explained the basic German grammar in the course to the Turkish audience. That ended up filling about 15 full notebooks and though it didn't bring my Turkish to full fluency (after all, I was in Korea and didn't have a single Turk to talk to) it did bring it to what I call 'prepared' status, meaning a language that is ready to become fluent after a month or two in the target country. Kind of similar to a person who has read everything he can find about piloting airplanes and knows each and every button, regulation, rule and everything else backwards and forwards, but still needs to get into a plane for some real practice.
데이빛 / Mithridates at 1:11 PM
Share