Kalmykia: too weird and unique to remain unknown

Ask a thousand people if they've ever heard of the Republic of Kalmykia and there's a good chance you won't find a single one that does. After all, Kalmykia barely registers on the world's collective consciousness. Why, it even loses out on Google Trends to something as minor as the character Boromir from Lord of the Rings:

Kalmykia just isn't one of those Places That Everyone Has Heard Of. Places That Everybody Has Heard Of for example are countries like Ethiopia, Egypt, Colombia, Taiwan, the Leaning Tower of Pisa, Iceland, Siberia, the Sahara Desert, the Gobi Desert, and so on. This doesn't mean that most people know a great deal about these places, but at the very least their names and a few basic facts are known to just about everyone.

Kalmykia is known to almost no one outside of Russia and serious players of a certain game (explained below), but IMO it's far too weird and unique to remain a place that nobody knows anything about. Here's why.

First, location: Kalmykia is technically located just within Europe, on the northwest shore of the Caspian Sea. It's roughly located where this red circle is: 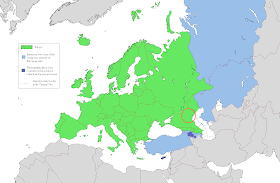 And for a closer look (there at the top): 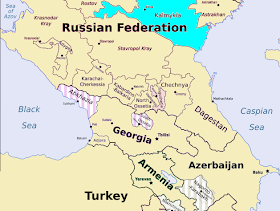 It's technically located within the Russian Federation but is a republic with its own president, official language (Kalmyk along with Russian), etc. It's also fairly large, with a surface area of 76,100 km², which is about the surface area of the U.S. state of South Carolina.

The first thing that makes it unique is that Kalmykia is Europe's only officially Buddhist state (hence the lotus on the republic's flag), and the reasons behind this are simple: the Kalmyks are a Mongolian people that migrated to the region centuries ago from the east, which means they look like this: 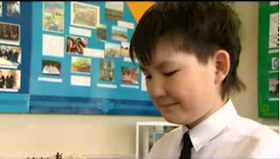 The language is also a variant of Mongolian. This makes Kalmykia a tiny pocket of Central/East Asia right within the borders of Europe, and you can see a lot of this in the architecture in and around the capital Elista.

A statue of the Buddha: 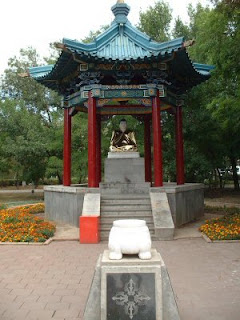 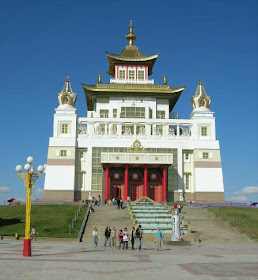 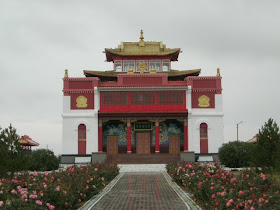 among others. What has recently brought Kalmykia a certain amount of fame recently, however, has been this: 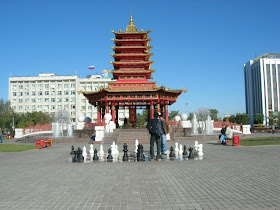 Yes, that's a chess set right in the middle of a public square. Kalmykia over the past decade or so has become the world's chess capital, thanks to its president Kirsan Nikolayevich Ilyumzhinov. He's not only the President of Kalmykia, but also the President of the World Chess Federation, and he's also a multi-millionaire. Since becoming president Ilyumzhinov has spent millions of dollars of his own money on turning the small republic into the chess centre of the world, making Kalmykia the only place in the world where learning to play chess well is mandatory at school, starting at the age of six. Ilyumzhinov believes that chess is the best way to teach children logic and critical thinking, as well as to give them something to do and aspire for in order to prevent boredom and the street crime that often results from this, so kids in Kalmykia are phenomenal at chess. It seems to be customary for journalists reporting on Kalmykia to make a visit to a school to get their ass handed to them in chess by a kid perhaps a quarter their age, and it's always fun to watch.

Not only do children all learn how to play chess in school, but Ilyumzhinov has spent $50 million to build a big chess-themed city close to the capital. In appearance it looks like your average middle-class North American suburb, except that there's no middle class in Kalmykia to occupy the houses so they stand empty most of the time, except when there's a chess tournament in the city or an important guest comes to visit. Participants in the tournament then get awards such as traditional garb handed to them by girls in skimpy chess-themed clothing (ever so slightly NSFW link. For more images see the main link here).

Oh, and Ilyumzhinov also claims to have been abducted one day by aliens long ago when he was in Moscow, and also believes that chess originated in space as well -- that it must have come from the outside due to the uniformity of chess rules throughout the world. 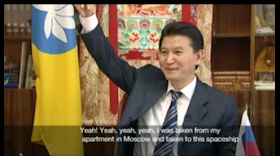 At the same time though he seems to have genuine good intentions for Kalmykia: he's a workaholic, doesn't take a salary as president, and apparently has spent over $100 million of his own money in the development of the country such as giving salaries to government employees and constructing buildings, as the tiny republic just didn't have that kind of tax base when he first became president. As he said in an interview in 2007 responding to a question about how much of his own money he's spent on Kalmykia:

More than one hundred million U.S. dollars. When I was elected president of Kalmykia in 1993 I paid about 20 million U.S. dollars to my republic. I gave this money for salaries to teachers, doctors, and so on. Because at that time there was no money so I paid people from my own pocket.

So there it is, a quick intro to Kalmykia. Located in Europe, officially Buddhist, over 50% of the people are of Mongolian origin, chess capital of the world, led by about as eccentric a president as you can get. Whether you approve of the way it's governed or not it's definitely unique enough to deserve to be a Place That Everyone Has Heard Of.

For more insight into Kalmykia see these videos below created by Al-Jazeera in English in 2007, probably the most comprehensive introductory videos to Kalmykia you can find online.